We could have chatted for sometime as we really didn’t get o deep into some of the issues, but one thing was clear is that Mr. Yap, BC Liberal MLA for Richmond-Steveston, an MLA for the supposed free enterprise party, staunchly supports continuing the current hybrid retail system and problematic distribution system.

For those that have listened to the show over the last year or so, you know that I strongly believe that fixing distribution is key to long term liquor reform and the creation of a truly level playing field.

The current system that supports the LDB’s monopoly on the distribution of imported wines, beers & spirits, is broken. By broken I mean costing the government $300M/year in lost taxes because of unfulfilled orders.

How to fix it is remarkably simple, but first let’s look at the biggest problem to solve – capacity.

The current distribution centres we built to handle $1B/annum of volume. 2017 will see $3B in volume go through. What this means is that some orders just can’t get filled because there is no space to accommodate the stock needed. So what was the LDB/BC Liberal solution. Spend $1B in building a larger facility in Delta.

The fact is that all the BC Liberals had to do was to pass an order in council that allowed suppliers to choose their distributor. There are a number of private & bonded distributors that are nowhere near capacity and would gladly take on the extra work. Not all suppliers would move, but a good number would because they value the 10% growth they automatically get.

Secondly this would speed up delivery times. No longer would a product ordered by a store in Richmond have to leave the bonded warehouse (ContainerWorld, Hillebrand) in Richmond, go to the LDB warehouse in Vancouver, only to be shipped to the store in Richmond.

Third, and this is the bonus, the government would not have to re-purpose any workers at the LDB Warehouse. The only thing that would change is that they have the capacity to fill the orders they get.

There are other things that such a change would involve and I would be happy to share those if you like. Drop me a line at dorkuncorked@gmail.com.

Pick Of The Week

In October I took a couple of bottles of the Paul Mas Valmont Blanc to Mom and Dad’s for Thanksgiving dinner and they were a big hit, so when I saw the Rouge version, I thought I would give it a whirl and I am very glad that I did.

This is a medium bodied wine that is very well balanced. What that means is that the flavour, the body and finish all worked together. It wasn’t flabby, or light, or short or tannic and bitter. It showed fresh ripe fruit, savoury spices with a delightfully fruit filled finish.

I would, and will, pair this with roasted chicken, and beef stews. As for cheese, go with a Gruyere or Ementhal.

Purchased At ~ BC Liquor Store Langford

Beer Of The Week: Gulden Draak 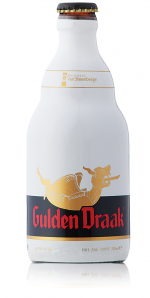 I recall a time when I thought beer either can in a bottle with a blue label or a bottle with a red label. In fact there was a time that, like in politics, families were either Labatt Blue or Molson Canadian families. Those times have long since past and the diversity in beer choices rivals that of wine choices.

At the beginning of the craft beer renaissance there was a lot of talk about Belgian beers and Belgian brewing. It was at this time I was introduced to the multi-time World Beer Champion – Gulden Draak.

Right away you can tell that you are not dealing with your run of the mill brew. At 10.8% alcohol it is a bit of a monster that pours dark brown in the glass. The nose shows caramel and Christmas cake, with generous malty greatness. The palate is big and broad. Caramel, toffee, candied fruit and nuts dominate the flavours, while the finish makes you think of the holidays and is dry.

As much as the above breaks things down, I think the beauty of this beer is in the whole package. There is a whole lot going on and it is all really enjoyable.

I went to the Van Steenberge website and found a very cool looking cocktail of all things – replace the Irish Whisky in an Irish Coffee with Gulden Draak. This is now on my list of things to do.

As for food pairings, this would be ideal with stews, hearty meat based pastas, smoked cheeses, and, yes chocolate.

You are currently browsing the Bolognese category at Dorkuncorked's Blog.